A prestigious invitation to the 750th Anniversary of Parliament

Alias Buchanan (Year 11)  received this very prestigious invitation as a member of the Youth Parliament. He was the only representative in Cheshire West & Chester invited, one of only six from the North West, and one of only 60 in the UK.

Alias Buchanan (Year 11)  received this very prestigious invitation as a member of the Youth Parliament. He was the only representative in Cheshire West & Chester invited, one of only six from the North West, and one of only 60 in the UK…….

“On behalf of Mr Speaker, The Rt. Hon. John Bercow MP and the Lord Speaker, The Rt. Hon. Baroness D'Souza you have been specially selected as one of 60 Members of Youth Parliament to take part in a celebration to mark the 750th anniversary of Montfort’s Parliament of 1265 and represent the UK Youth Parliament. This special event celebrates the 750th anniversary of the Parliament, summoned by Simon De Montfort, which met from 20th January to mid-March 1265.  It was the first time that representatives of both towns and shires were summoned simultaneously to discuss matters of national concern, something which ultimately paved the way for the emergence of the House of Commons. This special event takes place on January 22nd 2015 between 2pm and 5pm in Westminster Abbey Chapter House followed by a special Evensong.“

Alias submitted this report and picture (he is on the right) from the event:

"The event as a whole was a celebration, not so much a day where I had to do any work as an MYP. 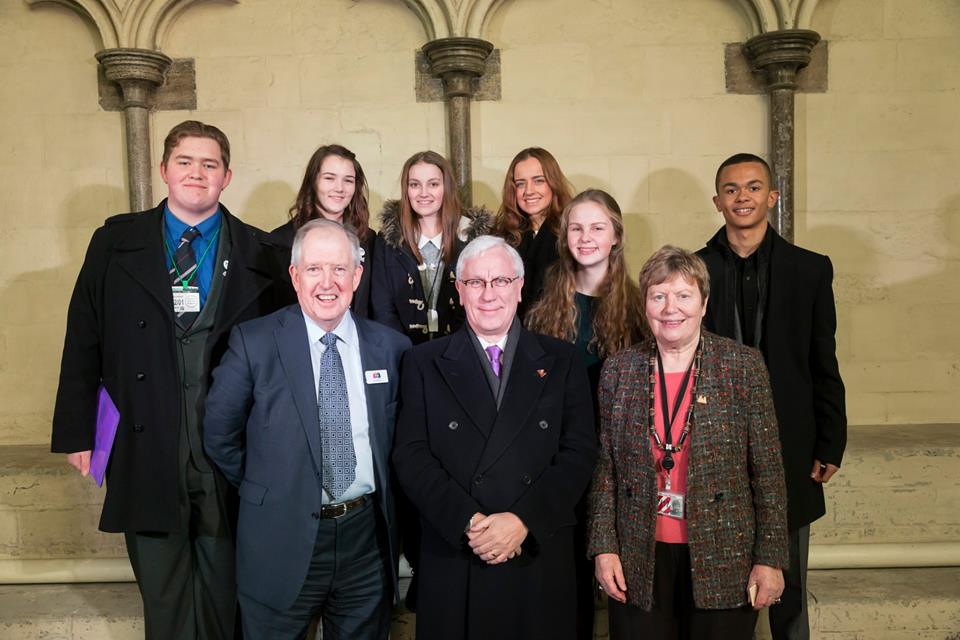 It was a celebration of 750 years of parliament and 800 years since Magna Carta. We have one of the most sophisticated parliaments in the world now. This day was all about celebrating, not where we are today, but where we have come from. It's about all sectors of parliament, whether it be the Lords, Commons or Youth celebrating together, the outstanding progress made in 750 years.

Being in the presence of both members of the Houses of Commons and Lords was magnificent. Not only could we be in the same room as them, but chat with them too! Having the chance to speak to the likes of the Lord Speaker Baroness D'Souza was a terrific opportunity. I'm so happy I was invited and extremely proud to represent my area in such a monumentally important event."