‘Coming to town after school on Friday? Nah…playing Glastonbury at 3:30.’
Tweeted by Upton High Drama

Scouted by The Farm’s bassist Carl Hunter, and signed to Heavenly Records after three gigs, Hooton Tennis Club gained attention with debut single ‘Jasper.’ Radio 6 DJ Lauren Laverne has proclaimed this to be the track of 2015 so far. Their second single, ‘Kathleen Sat On The Arm Of Her Favourite Chair’ picks up where their debut single left off. Bill Ryder-Jones is producing their debut album, ‘Highest Point In Cliff Town’, which is due to be released on 28th August 2015. 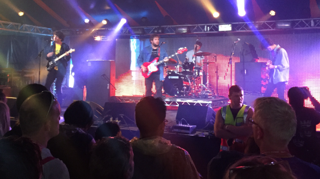 And that name? It comes from a road sign for the Little Sutton based tennis courts.