Mock Council of the European Union

The Mock Council seeks to replicate the real Council of the European Union (also known as the Council of Ministers), allowing students to debate live issues of concern to the EU's Member States. All participants represent one of the EU countries, the European Commission or the General Secretary and debate and vote on two issues of key relevance to the European Union.

On the 27th November, 55 students from 27 schools from across the UK arrived at the Foreign & Commonwealth Office in London for this year's Mock Council of the European Union. The event took place in the grand setting of the Locarno Suite. Each school had a responsibility either to represent one of the 28 EU countries in a debate or, in the case of Upton-by-Chester, to play the role of the General Secretariat. Our students did such a professional job that some students from another school thought that they actually worked for the European Union!

The topics debated were the Digital Single Market and the Circular Economy both of which are ‘real live’ issues currently being discussed by the real EU Council. The experience was as realistic as possible, the General Secretariat wrote down the arguments put forward by each country and helped the school representing the European Commission to write new proposals. After the morning debate the General Secretariat wrote and announced a short summary of the debate and counted the votes at the end.

The students involved were Claudia and Elinor, both of whom are in Year 12. They were accompanied by Mr Mulhall from the History & Politics department. Important European Officials such as Jaqueline Minor, Ruth Sinclair-Jones and Baroness Neville-Rolfe met with students to talk about the importance of language and European connections. Claudia commented that “It was an unforgettable day, we learnt so much about debating and negotiating. All in all a brilliant trip, we’d go again if we could.” 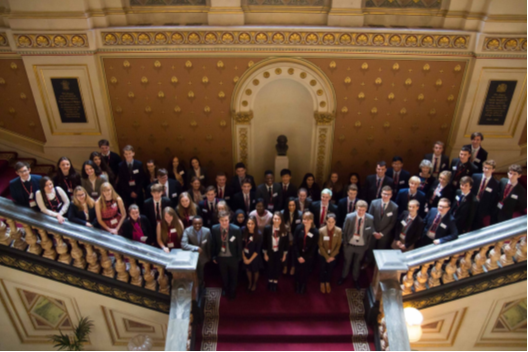 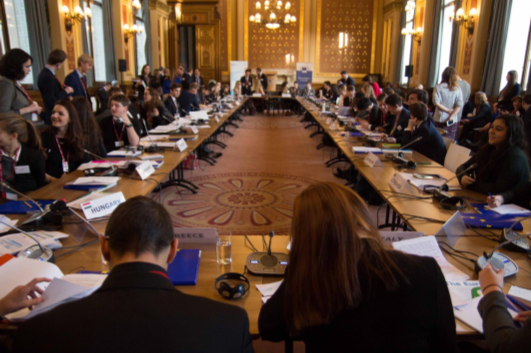