Malala Yousafzai was born in the Swat district of north-western Pakistan, where her father was a school owner and was active in educational issues. After having blogged for the BBC since 2009 about her experiences during the Taliban's growing influence in the region, in 2012 the Taliban attempted to assassinate Malala Yousafzai on the bus home from school. She survived, but underwent several operations in the UK, where she lives today.

Malala is recognised as an activist for female education and is the youngest Nobel Peace Prize laureate with hopes that one day, that ‘every child gets an education’. In 2017 she began her studies of Philosophy, Politics and Economics at Oxford University. 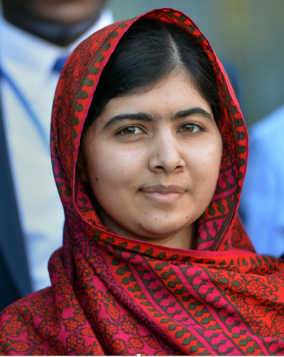